How human behavior can result in coyotes becoming a nuisance 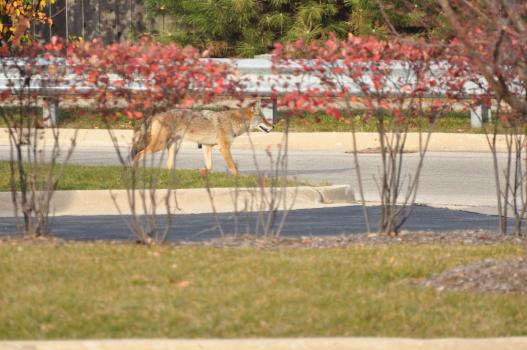 Coyote 434 in area of nuisance complaints

Coyote 434 is a good example of how human behaviors, such as feeding wildlife, can result in coyotes becoming a nuisance. 434 was captured on February 18, 2010, in a marsh surrounded by a subdivision and miles of urbanization. She was a young female, approximately 10 months old, and weighed 13.1 kg. Although this was the peak of the breeding season, she was not in breeding condition. A GPS collar was placed on coyote 434, which means that she was located by satellites on an intensive schedule (at times, this was every 10 minutes, other times every hour). This collar would last nine months before a timed-release mechanism would activate and the collar would drop off.

She remained in the marsh and a woodlot, using a power line easement as a movement corridor to avoid homes and yards. Her lack of use of these human-related areas was not the result of physical structures keeping her out; she strongly avoided these areas despite no fencing or other barriers. She was apparently part of a coyote pack, and other coyotes were also observed using the marsh area with her. This continued until August 2010, when she began to separate from her family. She completely separated from the group by the end of August, and was a solitary animal during September and October 2010, during which she moved over a large area covering multiple cities. On November 3, 2010, we received a request from the Illinois Department of Natural Resources to follow up with a woman complaining about a coyote (which turned out to be coyote 434) that had been appearing in her backyard each morning for a week. The animal was not threatening but was attracted to the squirrels under some bird feeders.

Her neighbor was putting out food for the squirrels and for deer and the complainant herself was also feeding free-ranging cats for the neighborhood. In this case, we were able to document the creation of a ‘nuisance’ coyote and could confirm that it was the behavior of people (by feeding wildlife) that changed the coyote’s behavior.