One of the most successful urban coyotes we have observed 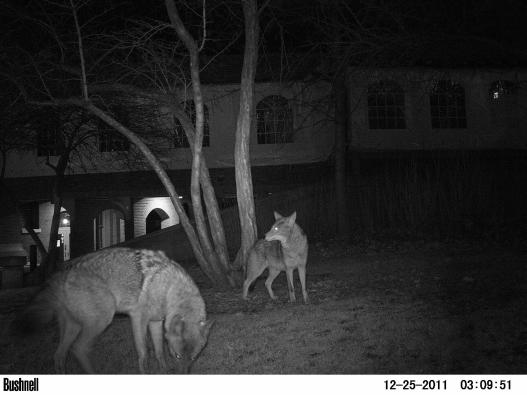 Coyote 441 is one of the most successful urban coyotes we have observed. This female was captured near the Lincoln Park Zoo in Chicago on March 10th, 2010. At the time of capture, she was a subadult in excellent condition, weighing 11 kg. A GPS collar was placed on her and we recorded her locations until November 2010 when her collar blew off (these collars are programmed to remotely fall off at a specified time). Thanks to continuous camera surveys by Lincoln Park Zoo's Urban Institute, she still shows up on cameras (because of her ear tags, we can continue to identify her) and several Chicago residents have also caught sight of her on the streets of downtown. On of our researchers even happened to catch a glimpse of her while enjoying an evening downtown; he looked out the restaurant at the exact moment 441 was trotting by the window. The last sighting was mid-year 2013.

Since her initial capture in 2010, she has given birth to at least two litters based on her body condition during pupping seasons. Coyote 441 appears to move quite well through downtown Chicago. She was one of the first coyotes we were able to study in downtown Chicago and her movements shocked us. Many of her locations are along Lake Shore Drive and within Lincoln Park, however, she includes several areas within Chicago in her home range. Although 441 has been visible at night, she has kept a low profile and we have not had any complaints reported for her despite her super urban lifestyle.

The special collar that she wore (along with many other transient or downtown animals) has given us great insight not only into exactly where she is traveling but how. We can program these collars to record locations at any frequency we decide so that we can essentially track nearly every moment (with the exception of her movement around the Chicago loop, which inhibits GPS fixes). In this way, we can determine what methods coyotes are using to get from "point A to point B." Interestingly enough, 441 seemed to prefer to utilize roads to her advantage. We even have documented her appearing to observe traffic patterns and moving into or across intersections according to red light patterns. It begs the question that if a coyote is to survive in such an urban environment, is there a certain new level of learning that must take place? Has she just been lucky? We look forward to keeping tabs on her in the future.