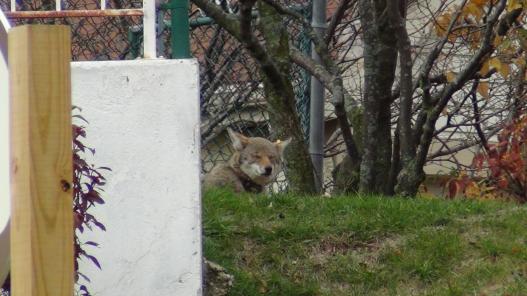 Coyote 571 was a coyote who beat the odds nearly every time. She was first captured in December 2011, not yet a year old. Given her young age class and healthy appearance, she was fitted with a standard radio-collar and we stood back to observe how her story would be written. 571 turned out to be a remarkable suburban animal. Although she did not navigate downtown Chicago streets, the Hoffman Estates/Schaumburg (IL) suburbs can often be an equally challenging network of traffic patterns (for human or animal). 571 would routinely cross roads spanning four to six lanes of nearly constant traffic, seemingly unconcerned with the world around her. She did not appear to notice things that most coyotes would hide from; she just focused on her routine. 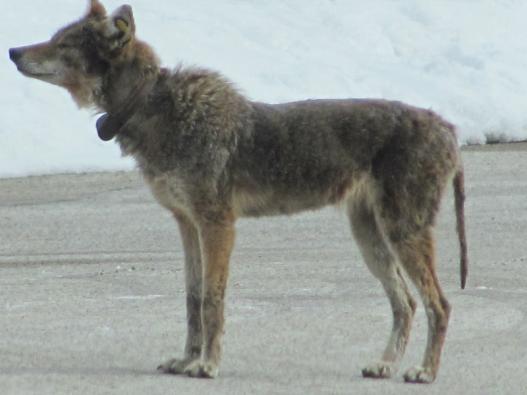 She was independent, a solitary animal who we almost never saw with another coyote. She was also highly visible, often active during daylight hours with a home range that included mostly urban habitats. It was normal for her to be seen in backyards or on streets, however, she never approached humans. Although we received calls reporting her presence, there was no indication of nuisance. In fall of 2012, we started to notice her developing mange. This disease is characterized by constant scratching and often results in extreme hair loss. For 571, her condition became progressively worse, but she was one of the lucky ones. Despite suffering through almost two winters with some stage of mange, she somehow survived and by the end of 2013 appeared to be almost completely recovered with a full hair coat. While mange is a disease that can be overcome, many coyotes, especially those living in Illinois, cannot survive the additional exposure of a cold winter with a reduced hair coat. Several other coyotes in our study perished as a result of this disease during the same winters.

At one point, it also appeared that 571 may have been hit by a car. She was spotted numerous times "tip-toeing" across roads and obviously hesitant to move quickly, spending an increased amount of her day not moving. With time, she recovered from this as well. 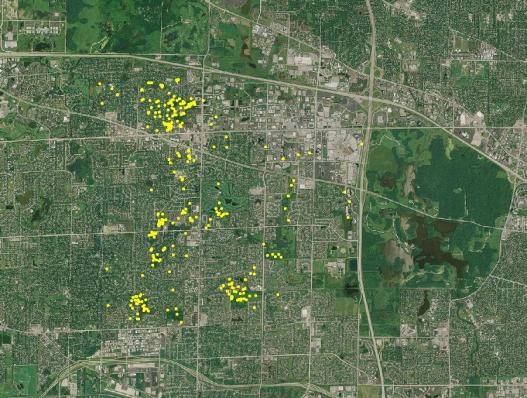 Many people stopped our technicians while they were tracking this animal to ask about her story. Again, there was no report of conflict, however, as 571 developed mange, there was a general elevated concern for the animal's well-being and her potential threat to people. One winter day, we responded to a call from a police department indicating this animal's increased appearance in a particular neighborhood. This was at the height of her mange infection and after a deep snow fall. Upon visiting this site, we found there was great wooded cover for her and it was no surprise she was spending time in the area. Unfortunately, the small patch of woods bordered the neighborhood and at least one resident we spoke with admitted to feeding 571. With this new knowledge, we realized 571 was being trained to associate with people in this area. While the woman feeding thought she was doing the right thing by helping this animal, had the feeding continued, it likely would have resulted in the removal of the coyote (the exact opposite of this person’s intentions) due to 571’s progressive proximity to people and their food. Coyotes that look to people for food can lead to conflict among residents and cause potential for negative human-animal interactions.

We were confident this was not an isolated feeding occurrence, but we were thankful to speak with this person who agreed to no longer offer food. Before long, 571 was back to her normal routine. She continued in her typical visual and yet non-offensive presence until March 17, 2014, when she was fatally struck by a vehicle near interstates 290/90. We value 571's life story because she shows both the influence of human activity and how she worked around it without issue.

Although she was visible, her general avoidance of people is common with most coyotes.