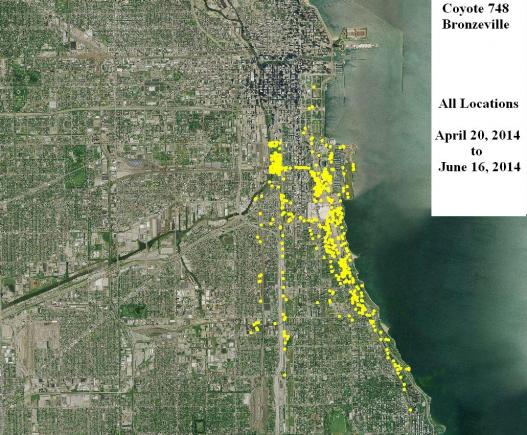 An ultimate, urban animal, Coyote 748 was fitted with a GPS-style tracking collar in the Bronzeville area of Chicago on February 24, 2014. At his capture, it was obvious he was of breeding age and once a few radio-locations were collected, we realized we had collared a resident coyote with an established territory. He seemed to go about his daily routine in a low-profile fashion, taking to the busy streets nightly without fail. In April, his normal quiet behavior turned aggressive towards dogs as people walked their pets through a specific area. Although he caused no physical harm to either people or pets, he was a source of potential elevated conflict. Further investigation showed this healthy male was acting as a father protecting his family — a discrete den was soon found at the site of the conflicts

Because of this animal's sudden behavioral change, his location, and our specific interest in coyotes living downtown, we worked with authorities to document the use of negative stimuli in an effort to study his behavior. Through calculated hazing efforts by our research team, coyote 748 was encouraged successfully to move his den to another location which we anticipated would cause less public conflict. Success! Pups were confirmed in May, although not long after, 748 was reported to have lost part of his lower back leg. While difficult to witness, many wildlife species learn to cope with such traumatic injuries and 748 proved his case. Within weeks, he was running the span of his normal home range without any report of conflict with humans. However, his long-term recovery was not to be. 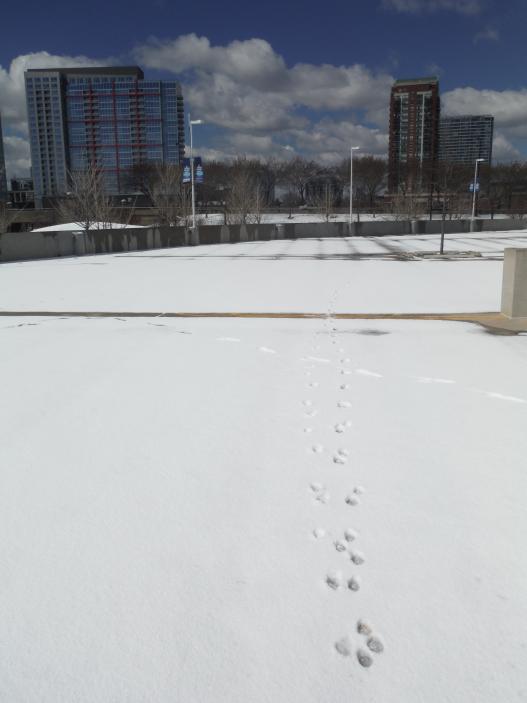 By mid-June, 748 had apparently suffered another accident leaving him unable to move and he was humanely euthanized by officials. Pathology tests run on his body identified blunt trauma as his ultimate cause of demise. While 748 seemed expert at his ability to navigate the Chicago streets and traffic, in the end it seems there was at least one vehicle he could not avoid. This coyote is a perfect example of an animal causing zero conflict until becoming a parent. The situation was also proof that hazing techniques can work in mitigating some human-coyote conflicts. While this animal could have been lethally removed from the population early on by authorities, our research showed that it is possible to practice non-lethal control in certain scenarios. This is an avenue in which we hope to expand our research, however, in many circumstances, we simply cannot act fast enough or the conflict is too unsafe.