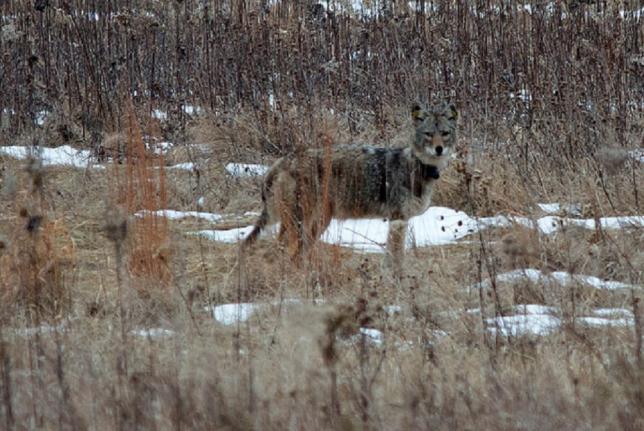 Photographer Stanley J. Jazwinski took this photo of a coyote in a Cook County Forest Preserve

Among the winter-related mortalities we recorded last month was coyote 358. Our coyotes are numbered sequentially as they are captured, so their identifying number is an indicator of how long they have been monitored. Over time, as coyotes come and go, a few become ‘mainstays’, usually residents of territories and parents to litters, and their ID numbers emerge from among the hundreds we capture and mark.

Last year, Coyote 358 became the only ‘300’ series animal left in the study, making her number the senior number among our coyotes. We captured Coyote 358 on December 16, 2008, as a young adult, and monitored her until technicians recovered her last month. She apparently died from exposure, possibly due to a mange infection. For nearly a decade she occupied a corner of a Cook County Forest Preserve, defending her territory and raising pups. She was something of a mystery, as we never captured any of her mates, and she was an exception among our females in that genetic testing indicates she had at least 4 different mates over the years.

Her passing represents a milestone for the project, the passing of the last coyote with a ‘300’ series number, and now the distinction of our‘oldest’ coyote (the currently active coyote monitored the longest) shifts all the way to Coyote 581.