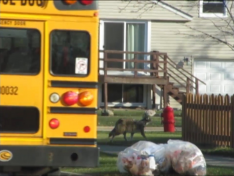 A cougar spotted 130 miles west of Chicago in November 2013 and a black bear showing up in a Rockford backyard this year are just a two examples of wildlife being spotted as they make their way from one habitat to another. Preservationists say this uptick is a result of effective conservation efforts and the fragmented location of preserved land. While wild animals do not seek human interaction, some interaction is likely as more animals seek new territory. The cougar sighting in 2013 led to the shooting of the animal as a result of little precedent and training. Now Illinois is working to change that. With black bears, gray wolves, and mountain lions now under state protection, law enforcement, conservationists, and animal experts are coming together to create guidelines and best practices for keeping both animals and Illinois residents safe. Our panel discusses how the population of wildlife is changing and how it affects the urban landscape.

Visit the link below for a TV video highlighting interviews with three local experts, including Dr. Stan Gehrt. Although this show does not focus on coyotes, it brings up several important points regarding other carnivores that are either residing or passing through the Chicago area.