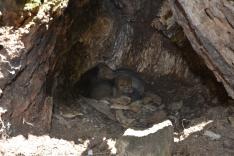 Mike Neri's voice echoed through a suburban forest preserve, announcing his find. He was quickly joined by fellow wildlife biologists who had been combing the underbrush looking for a coyote den. They found Neri scrambling though an ancient junk pile, plucking puppies from rusting car remains.

Visit link below to read the entire article or watch the YouTube video for additional insight.

This story does a wonderful job explaining what goes into our study of pupping season. The work is intensive but remains a highlight of our year as researchers. Several team members have been with the project long enough to know a few generations of animals. Keep in mind the countless hours of work it takes to get just a couple shots of a few coyote pups.

Also note that coyote pups are returned to their dens almost as quickly as we find them. There is no apparent negative affect on the pups by handling them — they are not abandoned nor do they bond with humans, although we are careful not to interfere longer than necessary.