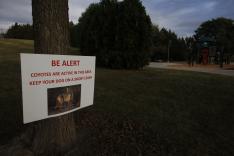 About 40 residents concerned about possible dangers from wildlife on Chicago's West Side gathered Wednesday after a 3-year-old boy was bitten by an animal his family believed to be a coyote.

This story was featured in both TV and print newspapers in the Chicago area; we selected this particular article to feature because it showcases multiple issues typically associated with human-coyote conflicts. When the story first broke, there was heavy speculation as to the animal at fault; claims that it was a coyote were reported, though this was never confirmed or refuted. Soon the stories multiplied and quickly several coyotes were removed from the area as a precaution. The bite made to this child's face while feeding the animal was eventually confirmed by animal control to have been by a domestic dog, not a coyote as first suspected. This part of the story never made it back through the news.

Regardless, it brought to light a few very important issues that are not unique to this particular neighborhood within Chicago. Several residents admitted to feeding coyotes or witnessed seeing coyotes being intentionally fed. There did appear to be a habituated population of coyotes in the area and a conflict was bound to happen, if not with this boy, then someone else, because of this habituation. Unfortunately, it took a significant event (even though incorrectly told) to bring awareness to the problem.

The news coverage also indicated that the child thought he was feeding a domestic dog. Children must be taught proper behavior around animals, whether domestic or wild. No loose animal should ever be approached or fed (especially by hand) by adult or child. Domestic pets need to be kept on a leash and children should learn when it is appropriate to touch an animal or not. A great rule of thumb is to always ask an adult for permission.

Although this incident sparked concerns for children's safety during outside play, this is more of a wake-up call than a false alarm. A child did get bitten. Whatever the circumstances, preventative education cannot be emphasized enough. Wildlife is not something to be feared, but it is something to be respected.