Urban conditions such as habitat fragmentation, development, increased road density, human disturbances, and food availability may cause some species to alter their behavior to exploit the landscape. Many behaviors have been linked to specific gene regions and behavioral differences between individuals living in different environments can also have a genetic component. To research this, we quantified coyote behavior in an extreme urban-suburban gradient and determined if there were allelic differences by population within dog behavioral gene regions. Behavioral data, such as the actions of a coyote during capture, processing, and an arm test, were recorded for over 80 Chicago Metropolitan Area coyotes during 2013-2016.  For each captured coyote,  a minimum of two observers assigned a 1-7 score for boldness and aggression, and single nucleotide polymorphisms (SNPs) and microsatellites were sequenced from eight gene regions. 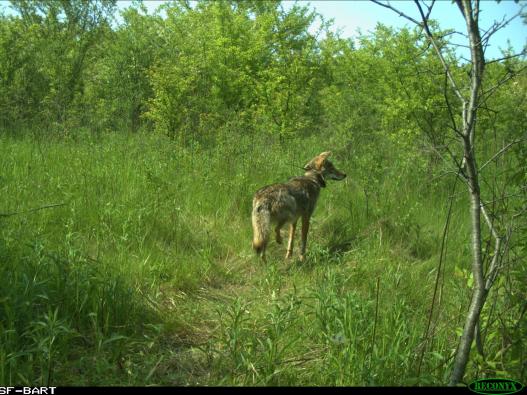 There were several behavioral differences during capture with city coyotes being more likely to vocalize, display teeth, and try to evade capture more than coyotes living in either the suburban matrix or suburban forest preserves. Most aggressive coyotes were defensively aggressive as they were more likely to be classified as a scared/shy individual versus bold. This means that the animals acted aggressively out of fear and as a defensive mechanisms rather than pure or bold aggressive behavior.

Differences between dog and coyote sequences in behavioral gene regions were found as well. Some behavioral gene regions were also different between coyote populations living in variable landscape types, indicating that environmental conditions may be selecting for certain behaviors that are controlled by genes. To better manage coyote populations in cities, it is important to understand the relationship between urbanization and predator behavior. Understanding the mechanisms, both environmental and genetic, behind boldness and aggression is crucial towards mitigating human-coyote conflicts.

We use sequencing to determine each coyote's genotype at single nucleotide polymorphisms (SNPs) that are located within known dog behavioral gene regions. This is coyote 860's SNP at a region on Chromosome 22. The SNP location is marked by the arrow and the genotype is AG (heterozygote) because it has both a green peak and a black peak at the same location. We are currently analyzing data to determine if some of the sequenced SNPs are correlated with aggressive or bold behavior. 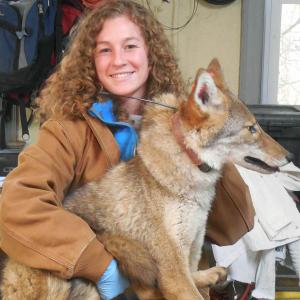