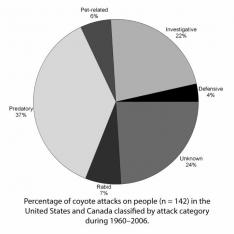 Coyotes (Canis latrans) have expanded their range across much of North America and are now established in many metropolitan areas. Their presence in urban areas has often elicited concern from the public, although the actual risk that they pose to human populations is unclear. We conducted an analysis of coyote attacks on humans in the United States and Canada, including 142 reported incidents of coyote attacks resulting in 159 victims. Most attacks were classified as predatory (37%) or investigative (22%) in nature. The number of reported attacks was nearly equal between adults and children, although child victims were more (p < .001) prevalent in predatory attacks. Future coyote attacks could be reduced or prevented through modification of human behavior and public education designed to prevent the habituation of coyotes. A standardized reporting system for coyote attack incidents would be beneficial for further investigating characteristics of coyote attack incidents.

Human Dimensions of Wildlife - Coyote Attacks on Humans in the US and Canada951.39 KB