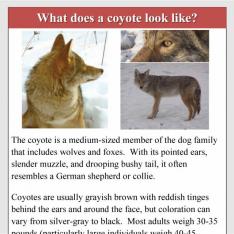 As coyote populations begin to thrive in urban areas, so have reports of conflicts with people. Originally from the open grasslands and deserts of Mexico and Central North America, coyotes have expanded their range across North America and now are found in an increasing number of cities in the United States and Canada.

This Ohio State University Extension fact sheet explains common conflicts people and pets have with coyotes and details options for living with coyotes.