Coyote 1 was the first coyote captured on the project 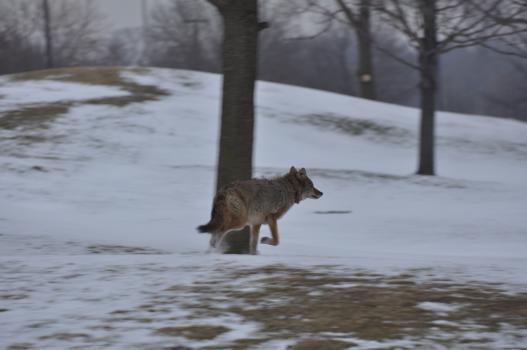 Coyote 1 was the first coyote captured on the project, on March 22, 2000, and has become the signature coyote of our research. When she was originally captured, she was just a year old and solitary. She weighed 13 kg (about 29 lbs), and was in excellent health, if not a little on the small side. In coyote years, she was a teenager. We tracked her movements over portions of five cities for the next nine months, as she floated across the landscape looking for a territory. Eventually, she settled down with an uncollared male during early 2001, and started the pack we refered to as the Meacham Pack. She was recaptured on April 12, 2004 (after months of trying on our part) as a mature, pregnant female. Again, she was in excellent health, weighing in at 37.5 lbs. She was an alpha female until her death in 2010, and we were fortunate to follow her every year as well as track many of her offspring (we were able to microchip 25 of her pups, covering six litters). Coyote 1 died of natural causes resulting from old age. 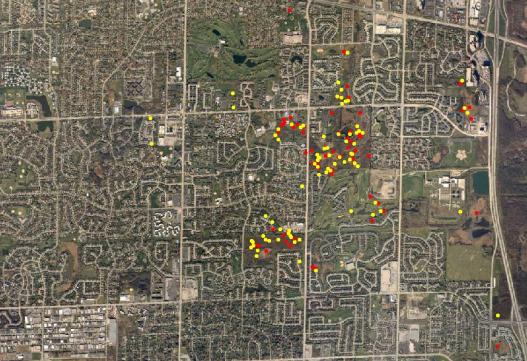 She was obviously very street smart, given that her territory covered many busy roads. She was once observed crossing eight lanes of traffic on I-290 when she was a subadult, and many researchers watched her and her mate cross roads regularly at night. Coyote 1 and coyote 115 lived in a heavily developed area within a few miles of O’Hare International Airport. In the map, yellow dots are locations of coyote 1 and red dots are locations of her mate, coyote 115. They utilized much of the green space in this urban area.

There was never any indication of human conflict with either animal.