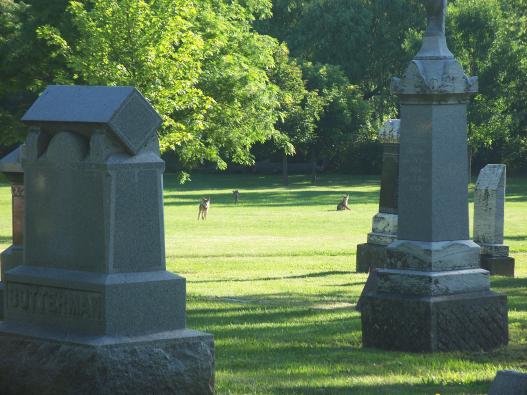 We were not able to capture the first mate of Coyote 1 prior to his death (likely from a vehicle), but we captured her second mate, Coyote 115, on February 18, 2004, at the peak of the mating season. Coyote 115 was in excellent condition at 18 kg (40 lbs). He remained with Coyote 1 constantly until her death in 2010. Their relationship was interesting to observe, where at times they were inseparable, and other times they would take short breaks from each other. Still, they defended the same territory together continuously after 115’s collaring date. Over that time, they had at least four litters together, with both parents helping to raise the young. We never received complaints about coyote 1 or 115 despite living in one of the most busy suburban areas of Chicago.

Coyote 115 was quite old the last we saw him, his age showing in his gait, his coat, and his eyes. Unfortunately (or maybe fortunately), 115 outlived the life of his radio-collar and so his end story will likely always remain a mystery. Efforts to continue tracking him failed despite our best attempts. Our last suspected proof of him was finding pups in his territory in 2012 - it seems he had found at least one more mate after his time with Coyote 1.

Coyote 115 was a participant during filming for the Canadian Broadcasting Corporation show entitled "Meet The Coywolf." Although misleading in title, this show aired on PBS in early 2014.