Coyote 508 was radio-collared on April 11, 2011 in the Poplar Creek Forest Preserve of Cook County, IL. He was an adult weighing 28.7 lbs and was in poor condition, with mange covering 30% of his body.

During the fall of 2011, coyote 508 began to venture further from Poplar Creek into the suburban landscape surrounding the preserve. In December of 2011 he went missing. It was not until the spring of 2012 that 508 reappeared. 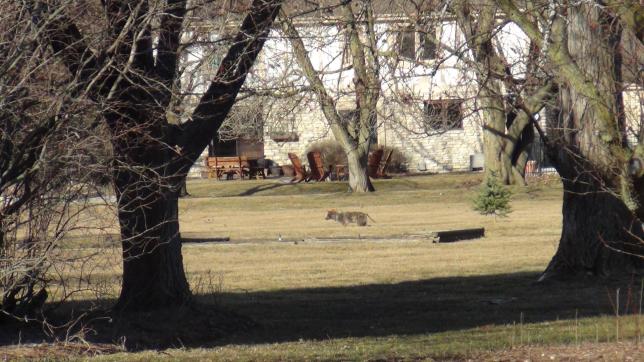 His travels over the winter involved crossing countless roads, finding a way across the Fox River, traveling over 12 miles from his former home, and ultimately meeting a female coyote that would become his mate for the remainder of his life. The research team received a call in May of 2012 from a homeowner in Campton Hills, IL stating that a red ear-tagged and radio-collared coyote was living under her shed in the backyard. The research team identified 508 immediately when visiting Campton Hills by his unique radio signal emitted by the collar. What the team found under the shed was the continuation of his life story.

Using a high-tech camera with a long scope, researchers found five, three-week-old coyote pups under the shed. The team removed the pups’ one by one and microchipped each of them before returning them to their home under the shed. That evening, coyote 508 returned and moved each pup to an alternative den away from the residential homes.

A mated pair of coyotes will have multiple dens, allowing them to move their pups as needed. Coyotes are very dedicated parents that do not abandoned their young even if they smell human scent. However, no wildlife should ever be handled except by trained professionals for specific reasons. 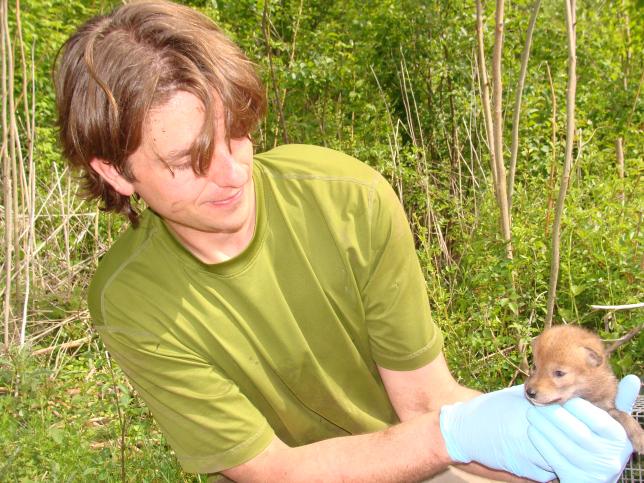 Researcher Shane checks one coyote pup of coyote 508's litter. If you find a pup, please do not pick it up.

Throughout the remainder of 2012, coyote 508 was seen throughout Campton Hills with his mate and a pup or two at times. This continued until the spring of 2014 when 508’s radio signal disappeared. We often find that young pups will chew on their parent’s radio collar, removing the antenna thus causing the radio collar to fail.

Coyote 508’s story came to an end in the winter of 2014. He was found dead at a local middle school curled up next to the building. His cause of death was determined as complications of exposure due to his mange infection.

We were fortunate to have learned from his life, and appreciate the calls from residents that alerted us to his locations after he went missing.