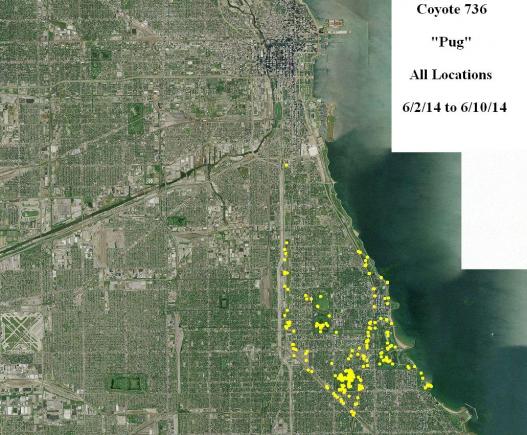 Coyote 736 was a healthy, young male that was trapped and collared on the southwest side of Chicago on June 2, 2013. His tail had a unique deformity — short, with a twist that resembled a pug's tail, so beginning his nickname of "Pug" (although we don't normally name coyotes, sometimes nicknames help our researchers communicate with the media when referring to animals). We were very excited to learn from this animal given his location. Pug traversed some of the most urban, rugged streets of Chicago and didn't seem to draw attention anywhere. His activity was primarily restricted to nighttime and the expanse of land he covered was remarkable.

In one area where he spent much of his down-time, the adult goose population was apparently causing conflict with people on-site. Goose deterring dogs were brought in to chase off the geese and a report of conflict between the domestic goose-chasing dogs and one of the resident coyotes came to be. In a matter of days, it was determined by the property owner that the coyotes had to go, despite the coyotes' role as a natural goose predator. Pug was only a study animal for 8 days:  he was shot, lethally removed along with other coyotes in the area. It was suspected that coyote pups were also involved, which may have contributed to the coyotes' interest in the domestic dogs. No physical harm was reported to the domestic dogs or to people in the area. 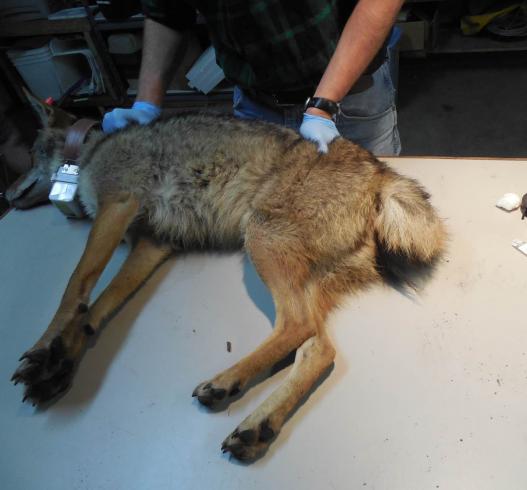 Prior to his death, Pug was a great example of the "everyday coyote" and provided a valuable source of information for our project in many ways. He was also part of the filming for National Geographic Wild's "Urban Jungle" show in the episode ‘Downtown.’ You can see him and his iconic tail in much of the footage that aired on that show.