About the Show...They’re the subject of countless newscasts. The horror stories from our headlines. Wild animals stalking our streets like never before. But their stories haven’t fully been told - until now. In Urban Jungle, big cat tracker Boone Smith takes viewers on a harrowing journey to the places we once counted as our own, but have gone to the wild. He ventures deep into the heart of some of the most crowded cities on the planet, to uncover a hidden world where predators and prey collide - outside our windows, above our skyscrapers, under our feet. All over the planet, a new wilderness is rising. And it’s just outside your door.

*Please note, video may not be available online. Stay tuned to future air dates as advertised by this channel. A copy of the show may be available via Amazon.

Urban Jungle, true to the "Wild" roots within National Geographic, captures stunning footage of some every elusive coyotes. Our researchers spent many nights attempting to get video of the animals we were tracking but the coyotes' tactics at staying hidden meant many more hours were spent chasing darkness. But this is exactly what we would expect. Even with tracking collars that let us know where they are, catching just a glimpse of the animals in motion is difficult. Set aside the dramatic elements of the show and you get a well told snapshot of the most urban coyotes we could find in the Chicago area.

For more information about one of the animals featured on the show, visit our page of coyote stories. Study animal "Pug" - coyote 736 - is the most iconic animal in the film because of his stub tail; though his full story did not make it into the show, it is worth your time to read. Pug's travel patterns are typical of many coyotes who use railroad tracks to get around people and cars. These routes offer a fairly safe travel path when trying to cover ground.

One clarification:  At the time of this show, the number of coyotes in Cook County was estimated to be around 2,000, which includes areas outside of Chicago city limits. 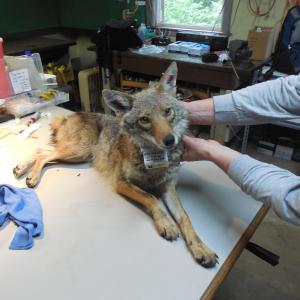